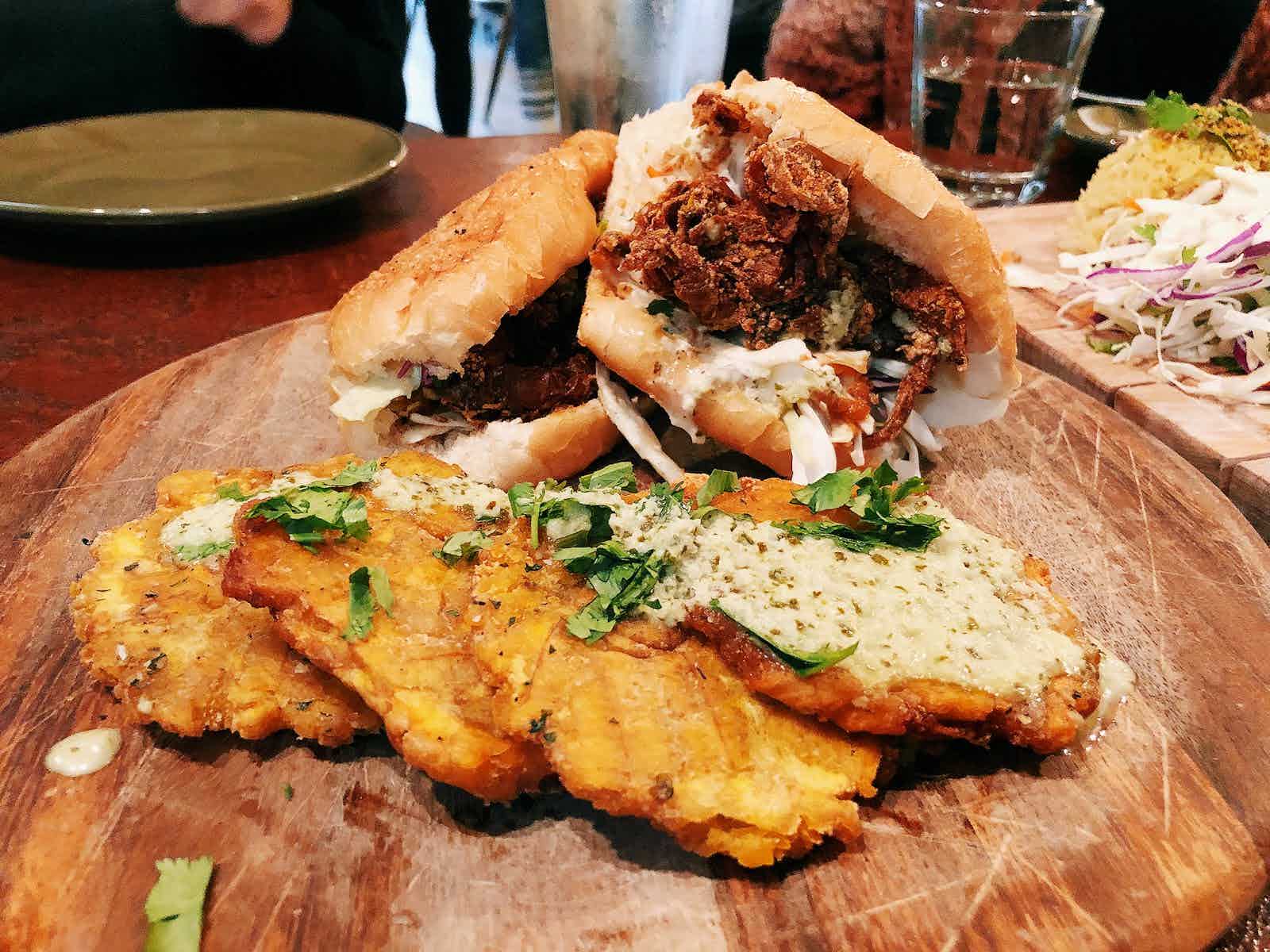 The popular Papa Bois food truck has set up roots at this Belltown spot, specializing in jerk chicken and massive plates designed to be shared between two or more. Grab jerk chicken or seafood, bowls stuffed with Caribbean slaw, meats and plantains alongside island-inspired cocktails, lychee lemonade and coconut milk caramel bread pudding in the laid-back, 21+ space. 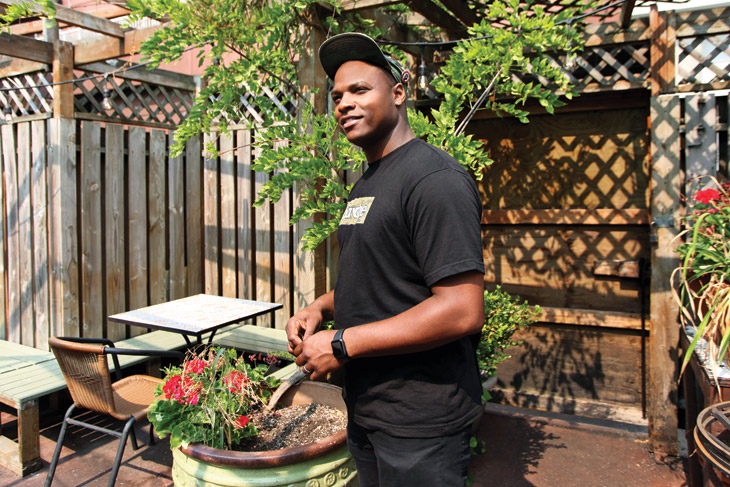 A meal at Jerk Shack takes you someplace else

Only two things are required to achieve the temporary nirvana known as “vacation mode,” and those are 1) a change in physical location and 2) a change in mental state. It’s a little-known life hack that with the correct set of signifiers, one can willfully trigger vacation mode at almost any time and in almost any place. For instance, dinnertime on a weekday in Belltown.
Eater

3 Places to Try in Seattle This Weekend

This Belltown spot may sound like a bad George Costanza comeback (“The jerk shack called ...”), but the food has serious bite, and the portions are generous. I’m a fan of the namesake jerk chicken, with spices that sneak up on you, along with the satisfyingly crunchy soft shell crab sandwich. The dishes here are best washed down with one of the many rum cocktails on the menu, including the Caribbean Goddess, made with brandy and pineapple rum. 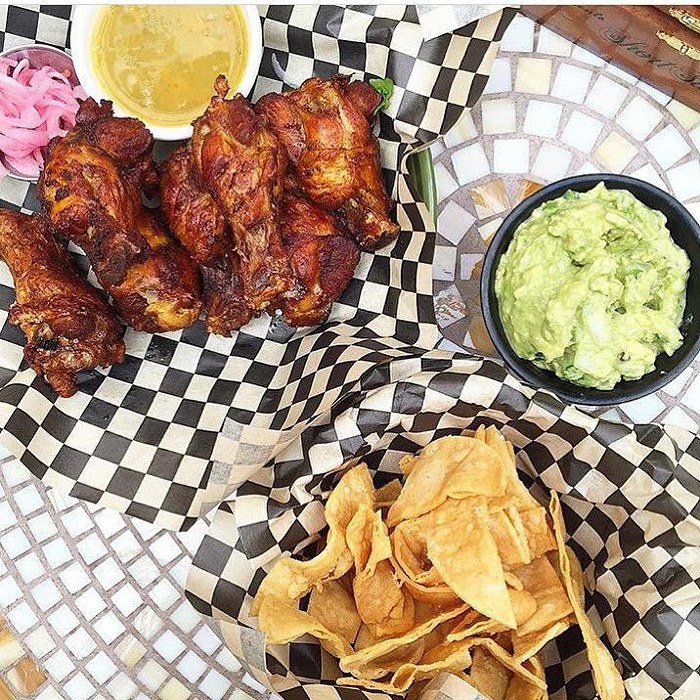 Trey Lamont of the Caribbean-Asian fusion Papa Bois Food Truck opens a brick-and-mortar establishment in the former space of the Innkeeper, claiming to serve the best Jamaican jerk fried chicken around. Everything comes sized for two or more people to share, and there’s also options like Cuban pork belly and a refreshing cucumber mango king crab salad. 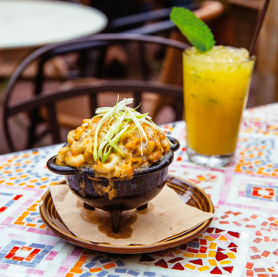 The Caribbeanesque interior, with its repurposed rum barrels, bright murals, and wide-frond plants, may subtly evoke tropical climes, but an evening spent with punch and jerk-spiced chicken out on the back deck is as close as one gets to island life in Belltown.
The Seattle Times

Can’t stop thinking about Jerk Shack’s sensational coconut milk caramel bread pudding. It’s over-the-top rich even before the mini loaf is browned on all sides in butter and burnished with caramel sauce. 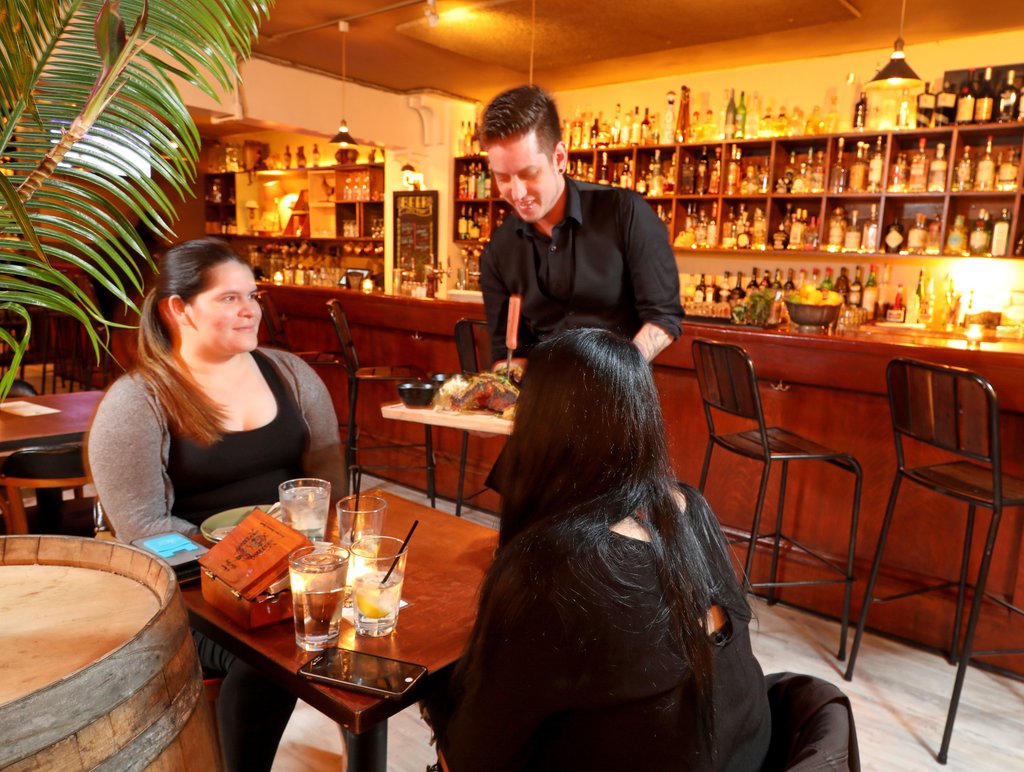 ...you’ll want to come with a crowd, so you’ll have an excuse to order more. Start with a pile of deep-fried soft-shell crabs. Add sides like sweet-potato-studded cornbread or jerk-seasoned mac and cheese. Finish with brown-butter bread pudding smothered in coconut caramel sauce. Even with a round of rum punches or raspberry mojitos, the tab will be way cheaper than a ticket to Jamaica. 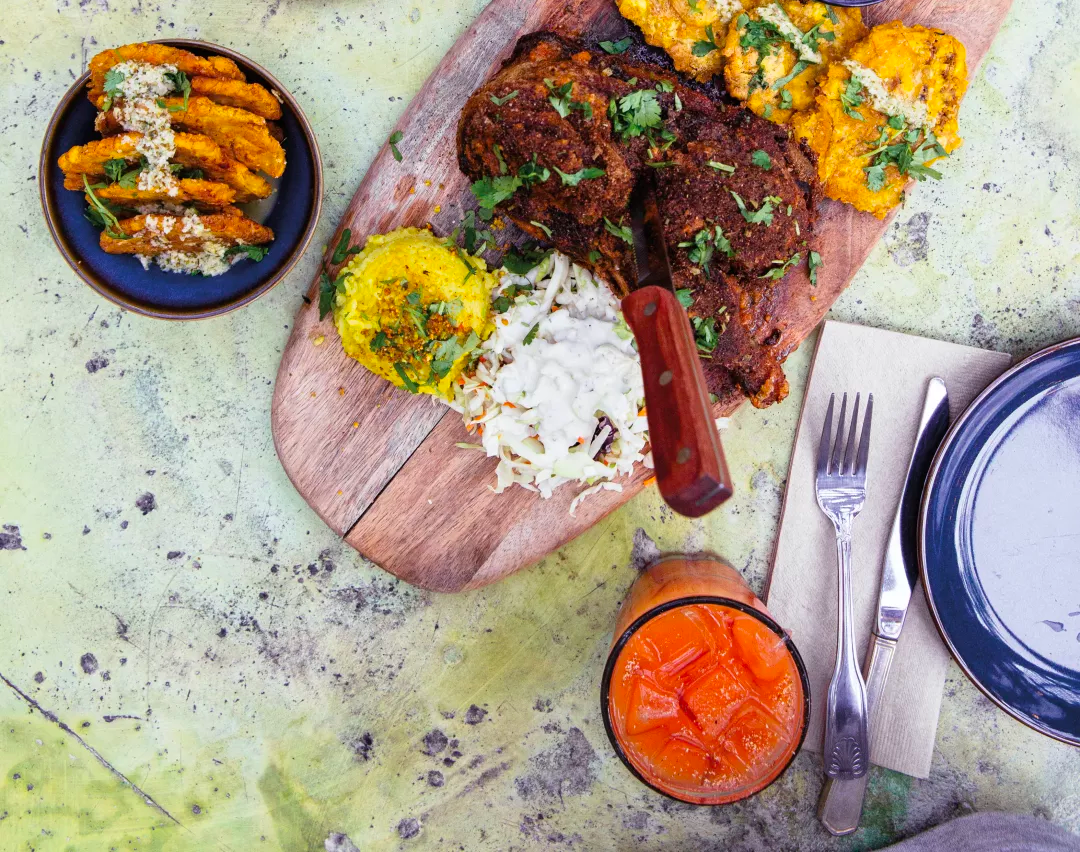 These Are Seattle’s 12 Best New Restaurants

When it comes to island flavors, Trey Lamont doesn’t play around. The Seattle-born chef knows how to coax them into a crock of mac and cheese, say, or a rack of smoked ribs. Six years ago, he and his partners started peddling Caribbean soul food out of a roving truck, Papa Bois. Now Lamont, who’s joined forces with the owners of Black Bottle and Bar Vacilando, throws down Caribbean-inspired dishes in Belltown, where sunshine-yellow walls and turquoise seating feel more tropical getaway than Northwest dining. A half chicken, fried and spiced with a secret jerk rub, arrives on a cutting board, knife protruding from its center—a definitive step back from portable food truck fare. Solid margaritas and a rotating mojito double down on the vacation vibes.

Trey Lamont’s name is scrawled above the Jerk Shack’s name on his Belltown signage—as in Trey Lamont’s Jerk Shack, as in this isn’t just any restaurant, but his restaurant. In conversation, he’s very clear that this is his food: Caribbean-influenced, intensely flavorful, all made from scratch down to grinding the spices for the jerk rub and churning the ice cream for dessert. 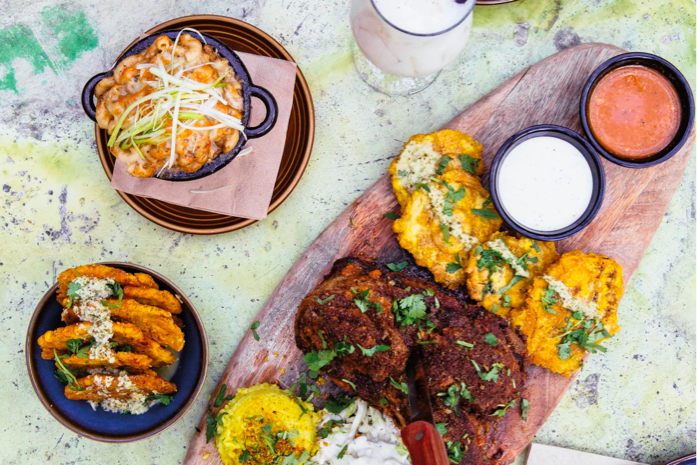 When it comes to island flavors, Trey Lamont doesn’t play around. The Seattle-born chef knows how to coax them into a crock of mac and cheese, say, or a rack of smoked ribs. Six years ago, he and his partners started peddling Caribbean soul food out of a roving truck, Papa Bois. Now Lamont, who’s joined forces with the owners of Black Bottle and Bar Vacilando, throws down Caribbean-inspired dishes in Belltown, where sunshine-yellow walls and turquoise seating feel more tropical getaway than Northwest dining. 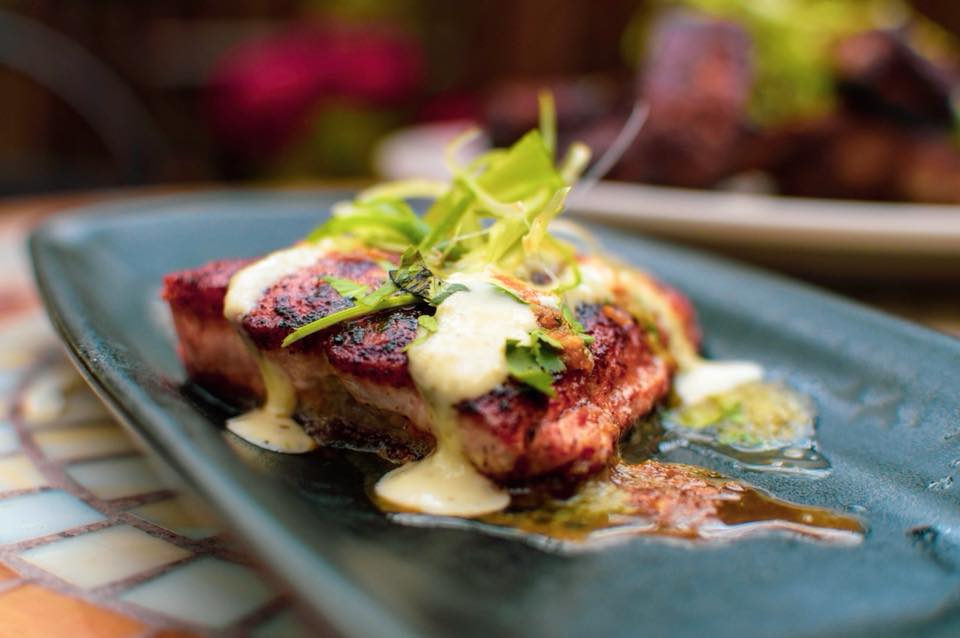 Jerk Shack’s Founder, Trey Lamont is a 14-year tenured chef and restauranteur. With his new restaurant, Trey is now a partner in the Black Bottle group, famously known for two restaurants of that same name, along with this latest venture. 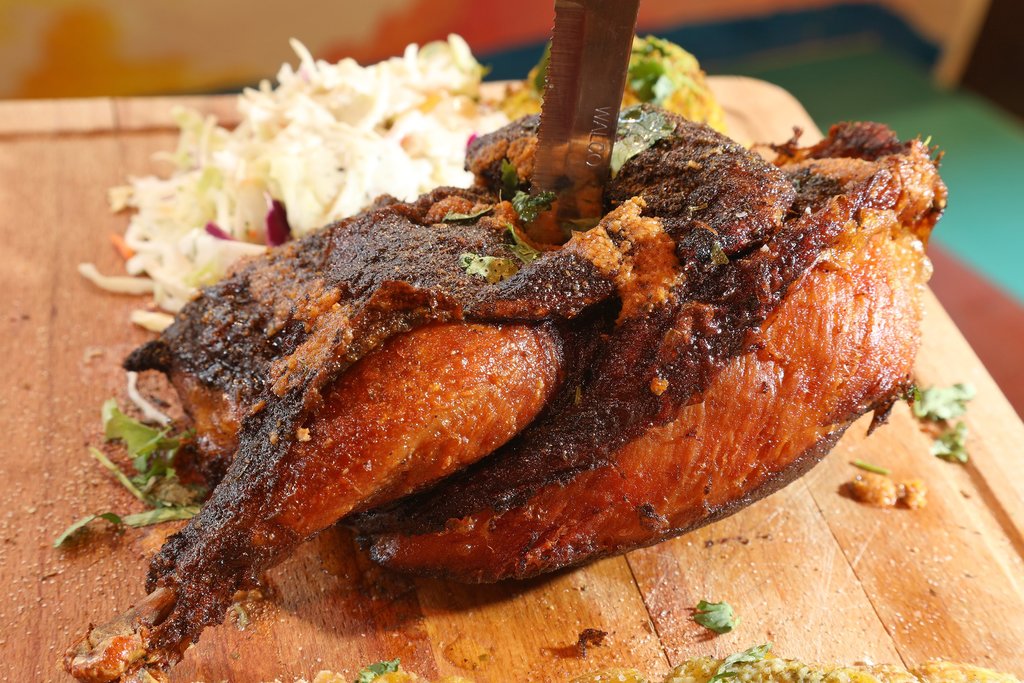 Feel the warmth of the Caribbean at Jerk Shack

Trey Lamont’s Jerk Shack is a ray of sunshine in the bleak Seattle winter. If the mango-yellow walls, turquoise benches and Technicolor art don’t warm you up, the cordial service and Caribbean-inspired fare definitely will. 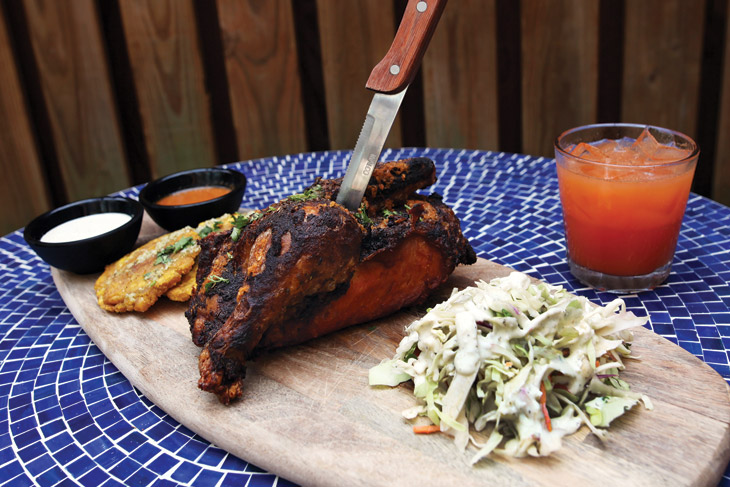 Bring on the Jerk

Here in Seattle, a trip to the Caribbean isn’t exactly the easiest thing to pull off, which is unfortunate given the islands’ stunning beaches—and delicious food. As a former travel writer whose beat was covering those far-flung spits of land, leaving their proximity was one of the things I fretted over most when moving here from the East Coast in 2011. No more quick flights to Florida, followed by a puddle-jumper to a place that served jerk chicken, plantains, tropical fish, and soupy, savory black beans. I occasionally found solace in Cuban dishes at Mojitos off Lake City Way, but their focus is more on South America. Jerk, specifically, is not represented. So, you can imagine my enthusiasm when Trey Lamont’s Jerk Shack opened recently in the Belltown space formerly occupied by The Innkeeper.